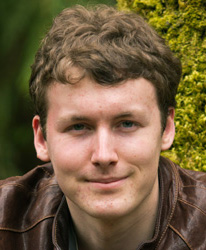 Zachary Tannar is an independent filmmaker who was born and raised in Nanaimo.

Over the years, his passion for filmmaking developed from writing stories as a child and picking up a camera at the age of fifteen. He has written and directed many short films. His latest short filmFramed was accepted into the 2014 Victoria Film Festival.

Zach is highly involved in the local film community. He has participated in many local independent productions in various roles. He is co-founder and president of the Hub City Cinema Society.