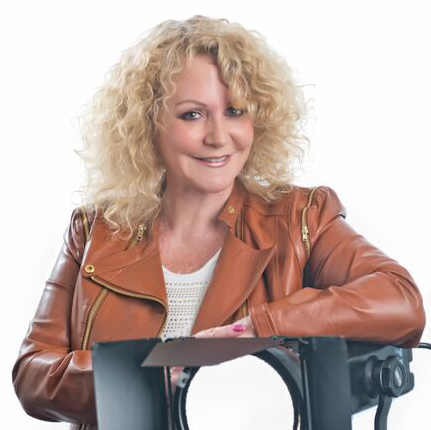 Jacqui Kaese has forged a foundation of opportunity for actors in a global industry. With over 30 years experience in the entertainment industry both in Canada and the UK, Jacqui is an accomplished actress, and acting coach. She has worked as an agent and is now in Casting partnered with Gemini Award winning Casting Director Lynne Carrow.

She is respected for her coaching technique and career development strategy. Many success stories have emerged from Vancouver Island and the Lower Mainland through Spotlight Academy.

It was 1992 and hundreds of top entertainment officials were gathered at a posh London hotel for an entertainment gala celebrating The Showman of the Year Award.

The award is one of the highest honours in the industry and makes an instant celebrity of its winner. This was Jacqui Kaese's year to be that winner. She had come a long way to get to this point in her life -- enjoying hard-won success initially as a singer and actor then as a senior manager with one of the UK's top entertainment corporations. "The entertainment industry in England is such a huge business," says Kaese.

"It puts you in the spotlight."

But on the night of the awards ceremony, the spotlight wouldn't find Kaese. She won the award, but she was nowhere to be found.

"This spotlight swung over to my chair, and my chair was only one in the room that was empty. I wasn't there." proving as always that you don't always have to be in the spotlight to find it.

If ever a movie is made of Jacqui Kaese's life, this scene will be a clear turning point in the film.

Spotlight Academy, Jacqui's business, was named to honour this moment.

Jacqui Kaese seemed destined for a life in show business.

She grew up in England surrounded by musicians and actors -- mostly all friends of her father's, Lionel Malpass, a jazz artist who was recognized as one of the best drummers of his time. "Basically I was brought up on music, and before I could talk I had a pair of drumsticks in my hand," says Kaese.

"But I didn't take to drums as well as I did singing and acting." In school, Kaese fell in love with the stage and won numerous awards as a child performer in local theatre.

By age 17, her professional career was well on its way when she auditioned for Britain's exclusive National Youth Theatre and won a coveted seat against 4,000 other young hopefuls. She became a protege of Michael Crofts who's long list of stars include Dame Helen Mirren, Colin Firth, Orlando Bloom. In fact Jacqui appeared opposite Sir Timothy Spall for a run in London's West End.

The next few years her time was divided between singing gigs where the band she was resident vocalist with did support for visiting stars, like Tina Turner, Tears for Fears, Annie Lennox and Robert Palmer.

Kaese's first big movie experience came came in a role as one of the mods in The Who's cult hit Quadrophenia.

Kaese enjoyed great success but her career changed when she developed nodules of the vocal chords. "Strain, stress, and work overload, I was maxed out," says Kaese.

Kaese was faced with little choice but to put her performing career on hold and look for a new occupation.

Within five years, she was a successful general manager who marketed and promoted musical artists and staged theatrical shows while running some of the company's top entertainment venues.

By 1992, Kaese was a household name in the industry -- and so it was no surprise when she won that year's Showman of the Year award, the first time this particular award was given to a woman.

It was a surprise even to her however, when she failed to show up for the awards ceremony. "I chose not to go. I chose to stay home with my son who was just four weeks old. And that was a true testimony to the changes I was making in my life."

Kaese wanted out of the fast-paced business. Newly married to Nanaimo-born former NHL player Trent Kaese, whom she met while he was playing hockey for a team in Peterborough and she was managing the award winning night club Shanghai Sams. Kaese was ready to slow her life down.

"I was working 70 hours a week. It was just not conducive to family life," she says.

"My husband and my son were a gift from God and everything else just fell into place after that."

With a year, the young couple had packed up their belongings and moved to Nanaimo. Trent and his father had plans to build Cottonwood Golf Course, which Trent now manages.

It has now been over two decades living in Nanaimo and life has not really relaxed for the Kaese's.

Two sons now Josh and Jake were diagnosed with Type 1 diabetes, so Jacqui now set her sights on raising a million dollars for research. She did this and in 2012 won volunteer of the year across Canada for JDRF. In 2013 both Trent and Jacqui won the Community Spirit Award for their charitable contributions.

Jacqui continues to run her school Spotlight Academy devoted to training actors for the big screen. She considers herself very blessed to have worked alongside some of the biggest names in Hollywood and has forged a foundation of opportunity for many performing artists from Vancouver Island. In 2006 Jacqui won a Sterling Award for business and recently Jacqui won the Arts Award from the Greater Nanaimo Chamber of Commerce.

Jacqui's constant priority is to help make dreams become a reality but it is the people who continue to dream that motivate her.

"I have walked in their shoes, I have dreamed their dreams"