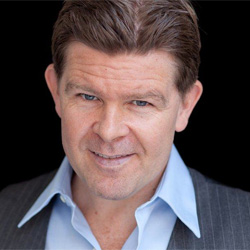 Bart Anderson is a Ryerson Theatre School graduate and an established acting instructor, having worked extensively in film, television, and theatre since 1985.

His film and television credits include roles in Human Cargo,Fairly Legal, Arctic Air, Godiva's, Slither, DaVinci's Inquest,Cold Squad, and Millenium. Most recently Bart was featured In Bruce Sweeneys film The Dick Knost Show which premiered at The Toronto International Film Festival and The Vancouver Film Festival.Look for Bart as a lead in the upcoming feature Hastings Street .

Bart's theatre appearances include a one-man show, At Demons With My Face, and several shows with the Shaw Theatre Festival. Bart received a Jessie Award in 1998 and was last on stage opposite Eric McCormack in the Arts Club production of GlenGarry GlenRoss.

I can always rely on Bart's intuition as a coach. His ability to meld an actor's strengths to the necessary truth of a given character is constant, and has helped me obtain many roles!

I'm indebted to Bart, who helped me land my first TV credit when I was getting started in the business. He worked my audition in class and I booked the role ... recurring! Thanks Bart!

Nowhere have I found a safer place to explore your craft. Bart reminds you how easy it is to find personal connections in any story and he reminds you that bringing yourself to the character is the key to success. His approach to acting is not only easy to comprehend but extremely effective. The reason why so many people continue working with him is because he is one of the most compassionate gifted coaches in town.